I buy a fair number of comic books. Often I buy them as standalone graphic novels or as collected trade paperbacks, but if I really like an ongoing series1 I'll buy individual issues as they come out.

This poses a problem for me: I'm not collecting them, so I'm not really interested in keeping them in plastic sleeves in special boxes, but I do want to keep them in reasonable, readable condition and have them on-hand and organized. Some people will bind their comics into volumes, which is really cool, but not exactly what I want.

I leaned towards something like a slipcase for some number of issues. Some of these exist, but when I looked they were expensive (around \$20 per case) and kind of boring-looking, so I opted to make my own. I made some prototypes by hand, but I wasn't quite happy with the quality of my worksmanship on them, so: I finally got around to creating one via laser-cutting instead.

The basic design is obvious: a box, tall and wide enough for a comic issue and deep enough for some number of them. For the prototype, I chose five deep2, and did some measurements of a stack of five comics: I had to accomodate a volume of roughly 6.75 in × 10.25 in × 0.375 in. The only bits of the design I wasn't sure about were the edges and the front and back panels. The edges I wanted to have a cut-away tab so one could easily pull the comics out, but I figured I could use a shape that was more interesting and unusual than just a half-circle. The front and back would be bland blank: I considered engraving an image into them, or leaving them blank for later painting, but ended up deciding to cut a window into them so you could see glimpses of the front and back covers of the comics inside. Despite not knowing the exact shapes of either of those features, I went ahead with designing.

I created the blueprint as a Haskell program using the diagrams package. The code was reasonably straightforward: as I wanted to experiment with the pull-tab shape and the window shape, I represented those as arguments to a function comicBox which drew the rest of the slipcase, allowing me to easily create several variations on the details as I went.

I already decided to use Ponoko to cut the box, so I also included some utility functions that simply colored lines the appropriate color for cutting or scoring according to Ponoko's guidelines—-0x0000ff lines for cutting, and 0x00ff00 for scoring.

The code is actually not all that long:

I decided on a simple array of grid squares for the window shape, and an angular kind of tab shape, which you can see below. 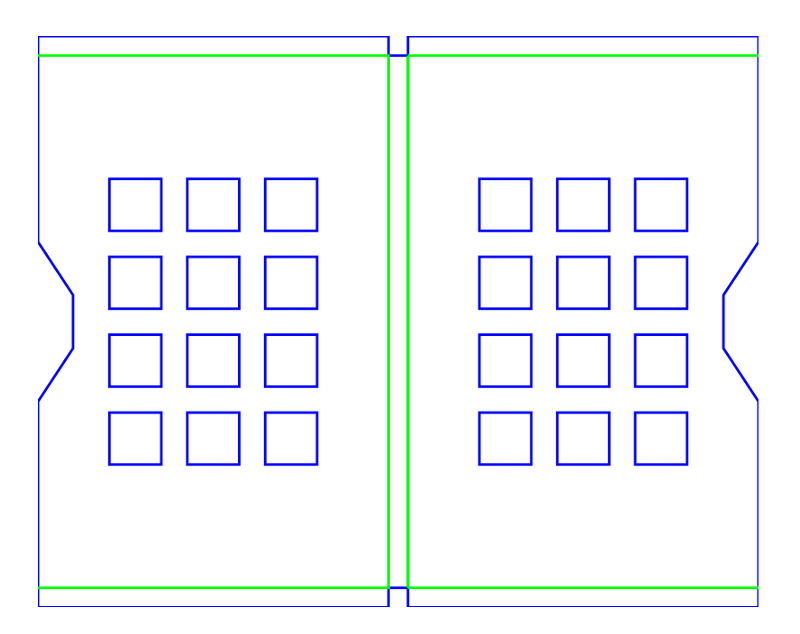 This produced a nice clean image, but not one that fit all the specifications for Ponoko plans—-it needed to be a specific size, and lines for cutting needed to be a specific thickness. Instead of finding the right functions to get my program to emit the correct line thicknesses and image size, I decided to just clean it up in Inkscape and copy it onto the templates for cutting that Ponoko supplied. I might go back and rewrite the code to spit out a valid uploadable image at some point, but it wasn't a priority.

I opted for cardboard as a material: it's not as thick as the chipboard I'd prefer, but it means I could fold (and not have to assemble) the box, and it's relatively cheap. I considered bamboo or some kind of thin wood, but for the first prototype, at least, cardboard seemed like a simpler choice: I can always try other materials later.

I used some of the excess space on the board for an unrelated experiment that involved a lot of engraving, so it was more expensive than it would have been had I simply opted for the cutting and scoring. When I get more made, I won't use that excess space for engraving-heavy things, so the price should be much cheaper.

After cleaning it up the design in Inkscape, I was ready to upload it and wait about a week for it to arrive!

I'm pretty happy with the final result, which is shown here containing five issues of a comic. I didn't think to take a photo of the raw cardboard sheet before punching it out and gluing it together, but you can easily extrapolate what it must have looked like.

The biggest problem is that the slipcase is too snug—-something I anticipated, but I wanted to see exactly how snug it would be before I scaled up. The next iteration will have some more breathing room, which will make it easier to put comics in and take them out.

The next iteration will also have the comic name engraved on the spine of the case: this will make it take slightly longer to engrave, but should be negligible overall.

I also am going to modify the windows on the front and back and the tab on the side in a thematically appropriate way: I am already experimenting with various motifs I can use for particular comics. For example, I could create a slip-case for storing issues of Bitch Planet that has a window on the front and back in the shape of the Non-Compliant emblem.

My only real annoyance during the project is that the diagrams library has some weird corners and odd API design choices3. It is also a truly massive library. At one point, I deleted my sandbox, started rebuilding, walked to a nearby café4, had a coffee and sat for a bit, walked back, and found it still compiling.

Still, for the most part, it all worked without a hitch. And it was a lot of fun: creating a useful physical object5 from a screenful of code is a pretty cool feeling!